subscribe and be the first to get the freebies! 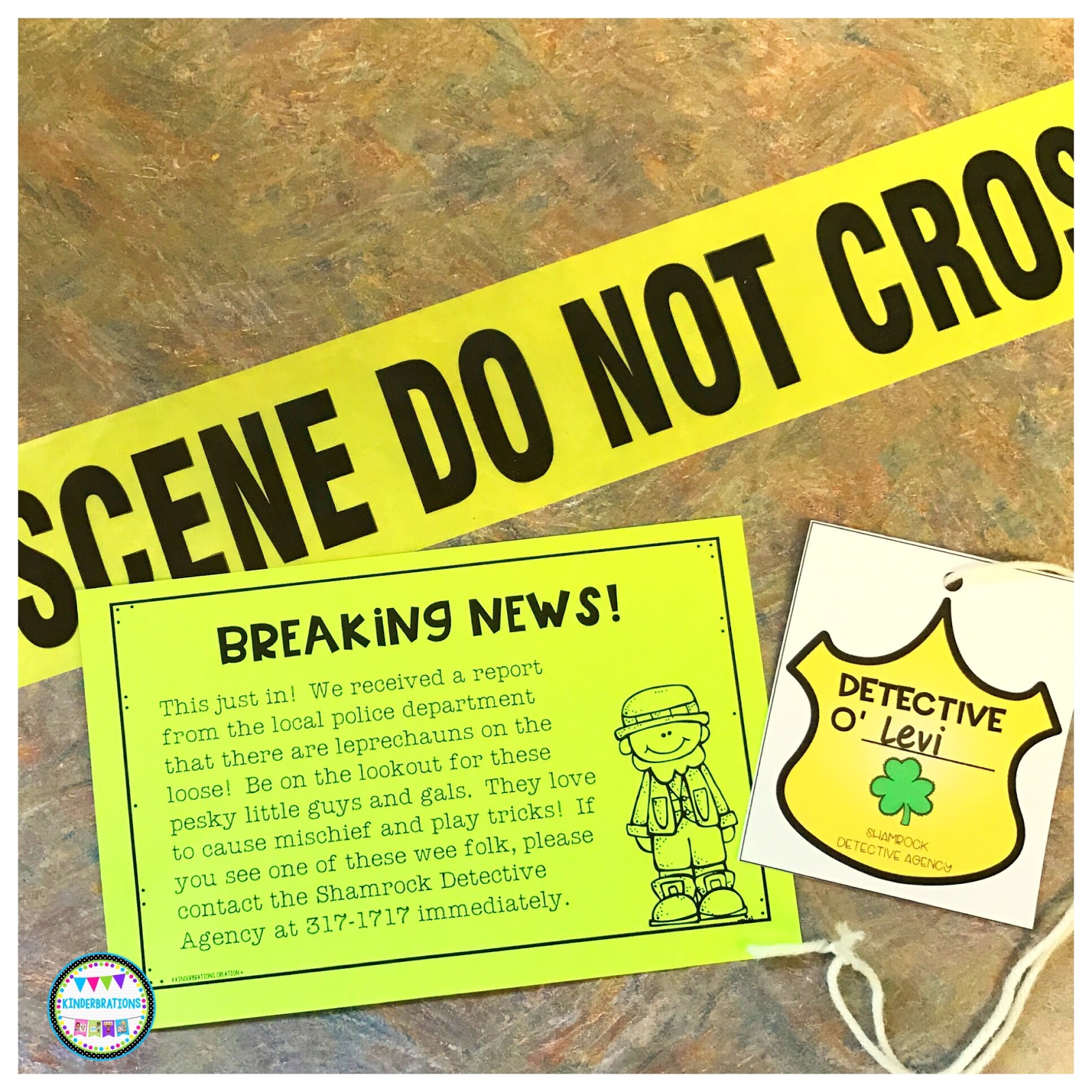 Welcome to the Shamrock Detective Agency! Our detectives were highly engaged as they solved the Case of the Tricky Leprechaun through math, literacy, science, STEM, art, and more!Creating the Magic: The students walked into a crime scene where Finnegan O’Malley, the leprechaun, had ransacked the classroom. They had to uncover clues that would hopefully lead them to the capture of that tricky leprechaun.  Our students received their detective badges and became part of the Shamrock Detective Agency. The “detectives” immediately began working through different investigations to uncover clues in order to lead them to the tricky leprechaun.

Classroom Set Up: You can go as crazy as you want with this or keep it simple!  We hung crime scene tape (you could also use caution tape) outside of our classroom door and near the “crime” scene.  To keep costs down, you could also make your own crime scene or caution tape by cutting long strips of yellow butcher paper and writing CRIME SCENE or CAUTION on them.  Outside of the classroom door, we created a “mess” (dumped out math manipulatives and added little green footprints).   Inside of the classroom, we turned some chairs upside down, wrote on the white board with green marker, dumped some containers, turned items around or upside down, and spread gold coins and three and four leave clovers around. Let your inner leprechaun out!  To add to the authenticity of the crime scene, we made evidence markers and placed them around the room next to different pieces of “evidence” (the footprints, a turned over chair, a green crayon on the floor, etc.). We also created red evidence tape that we taped on boxes and paper lunch sacks. We spread these boxes and bags throughout the room to add an extra touch.
We also made leprechaun footprints by making a fist with our hand and painting the side of it with green paint.  We made “footprints” all over the classroom by pressing the side of our hand down and using our fingertip dipped in paint (we used tempera) to create the toes.  Soooooo cute and fun! We had them going up walls, walking across counters, and even a few in the bathroom!


Remember, you can also keep this very simple. Especially if the idea of cleaning up leprechaun footprints and leprechaun messes, isn’t your idea of a good time.  The day will still be very magical and fun with a few or even no extra touches.

The Big Day: When the students arrived at school on St. Patrick’s Day, they walked inside to discover the classroom had been ransacked and there were little green footprints all around the classroom on counters, floors, tables, etc.  We looked around for clues to try to infer what happened.  We had the students come to our carpet area and discuss what happened, and who could have done it. Many of them said that they thought it was the tricky leprechaun!


We asked them if they wanted to become detectives and join the Shamrock Detective Agency, so that we could try and catch the mischievous leprechaun.  Of course, it was a resounding YES! Students were given detective badges, plastic fedoras (Amazon, of course!  They are pretty cheap, and we use them for all kinds of things.  We just “Lysoled” them after use), case file folders (with all of their recording sheets stapled inside), and were sworn in.


Finnegan O’Malley, the leprechaun,  left them a note explaining that they could gather clues by completing investigations which would hopefully lead them to him at the end of the day.  After students finished an “investigation” or completed a “protocol procedure” (center), they got to see the clue from inside of the envelope at their center spot.  At the end of the center time, we gathered all of the envelopes, pulled out the clues, and unscrambled the sentence.  It said…”To find my gold, go take a look where you can find a ____.” At this point, they saw that one clue is missing.  They found the envelope that had the final riddle from Finnegan glued to the front.  Once they figured out it was “book”, we went to our school library.  There, students found a note from Finnegan that said that they didn’t catch him this time but he left a little treat for all of their work and effort.  You can make treat bags using the topper included (we put Rolos or Lucky Charms inside) or you can leave a little pencil, sticker, or anything fun!  We also had small, green cupcakes waiting for them in the library!  You could also just leave a note without the treats.  They would be just as excited.

WANTED POSTER
At this station, students completed a directed drawing of the leprechaun.  They also wrote the poster details.  They brainstormed the crimes he committed and wrote about one or more of them.  You could also split the drawing and writing into two different centers. 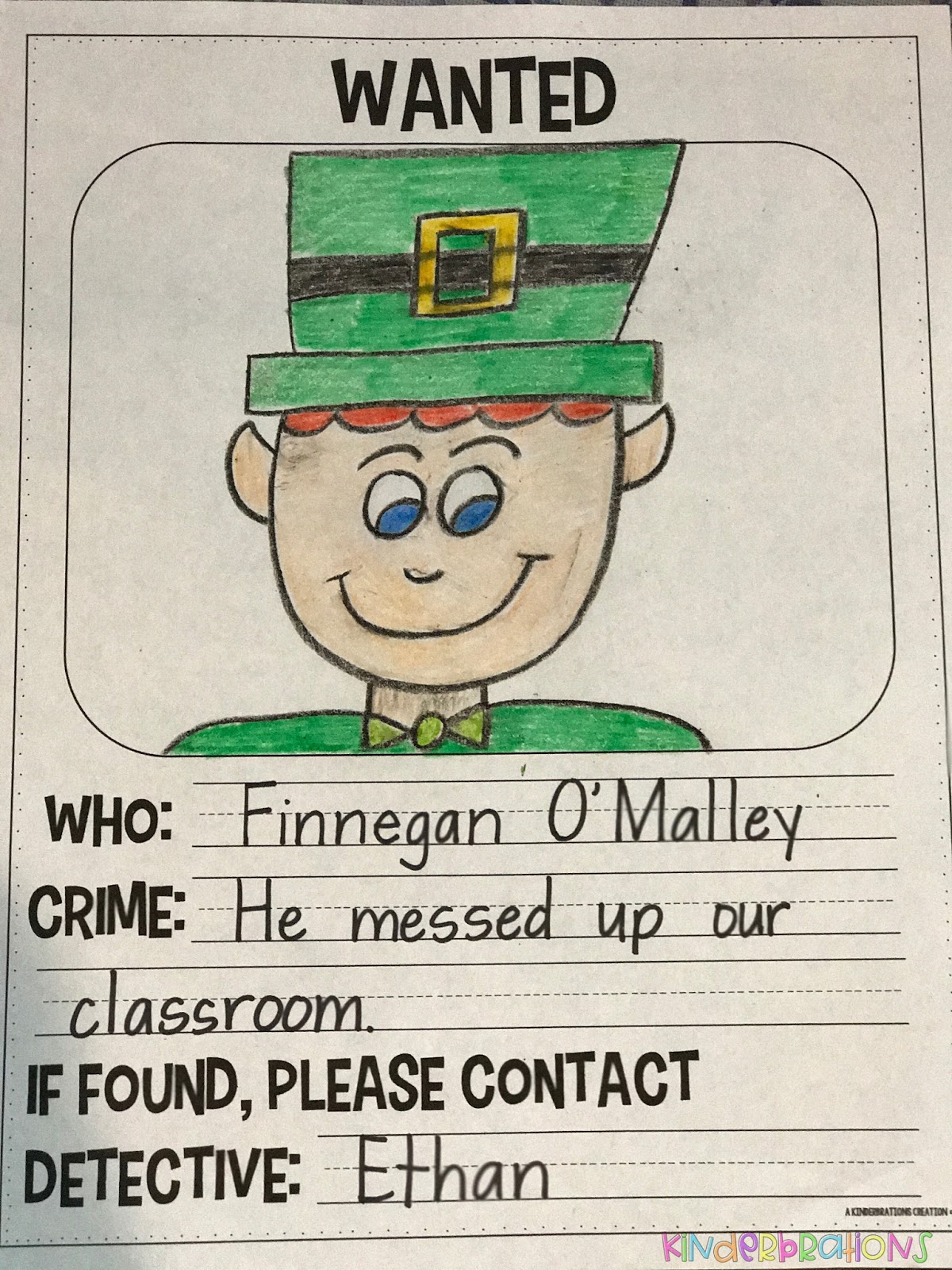 Don’t panic!  This is our sample, not one of our TK/kinder friends’ wanted poster.

LEPRECHAUN LOOKERS
Our students used these “Leprechaun Lookers” when they went in search of the leprechaun at the end of the day.  We printed them on white card stock for sturdiness and the students cut and colored them.  We actually put two of these together and taped a piece of green cellophane (which we had precut) in the middle for a fun twist! 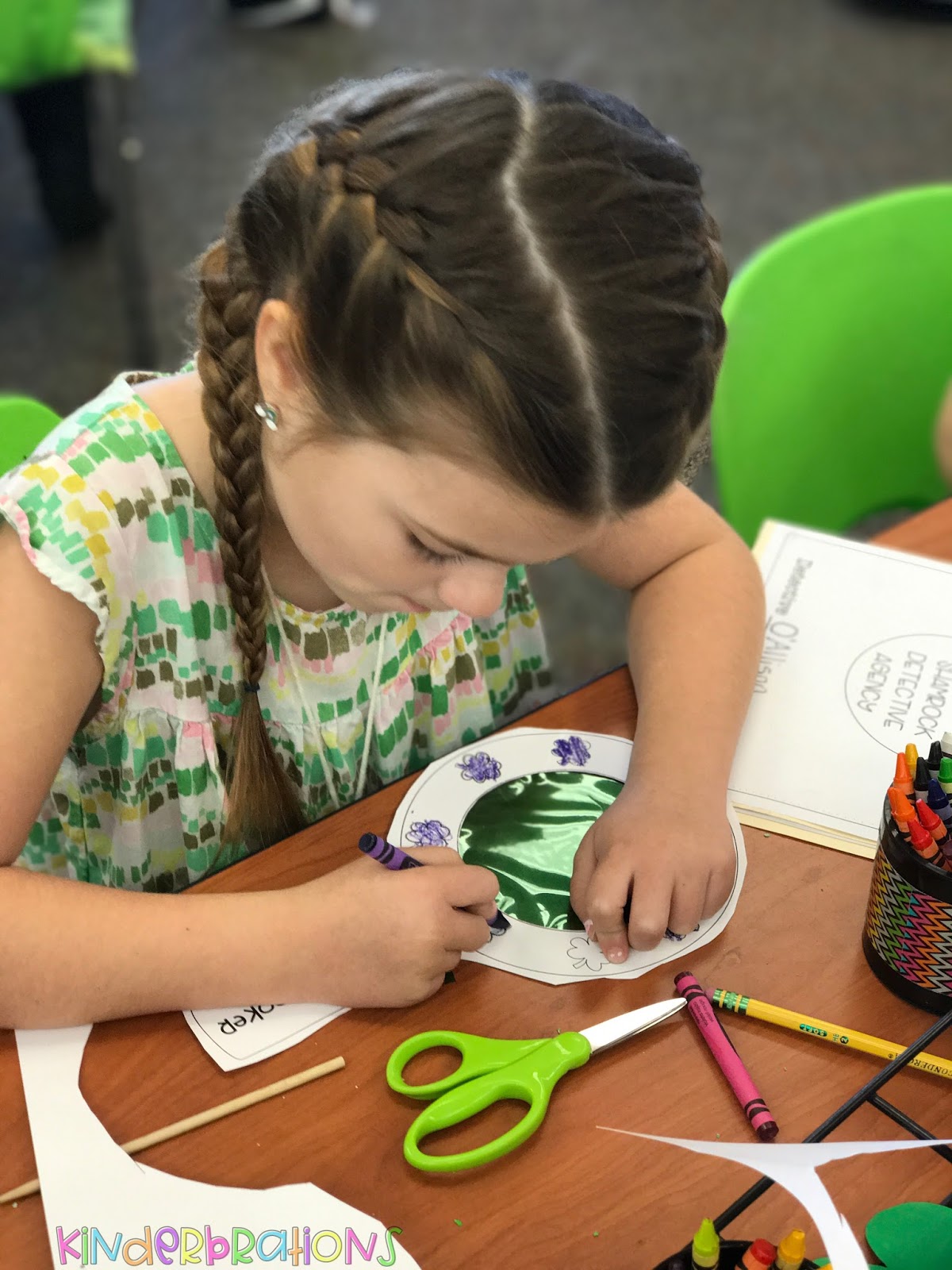 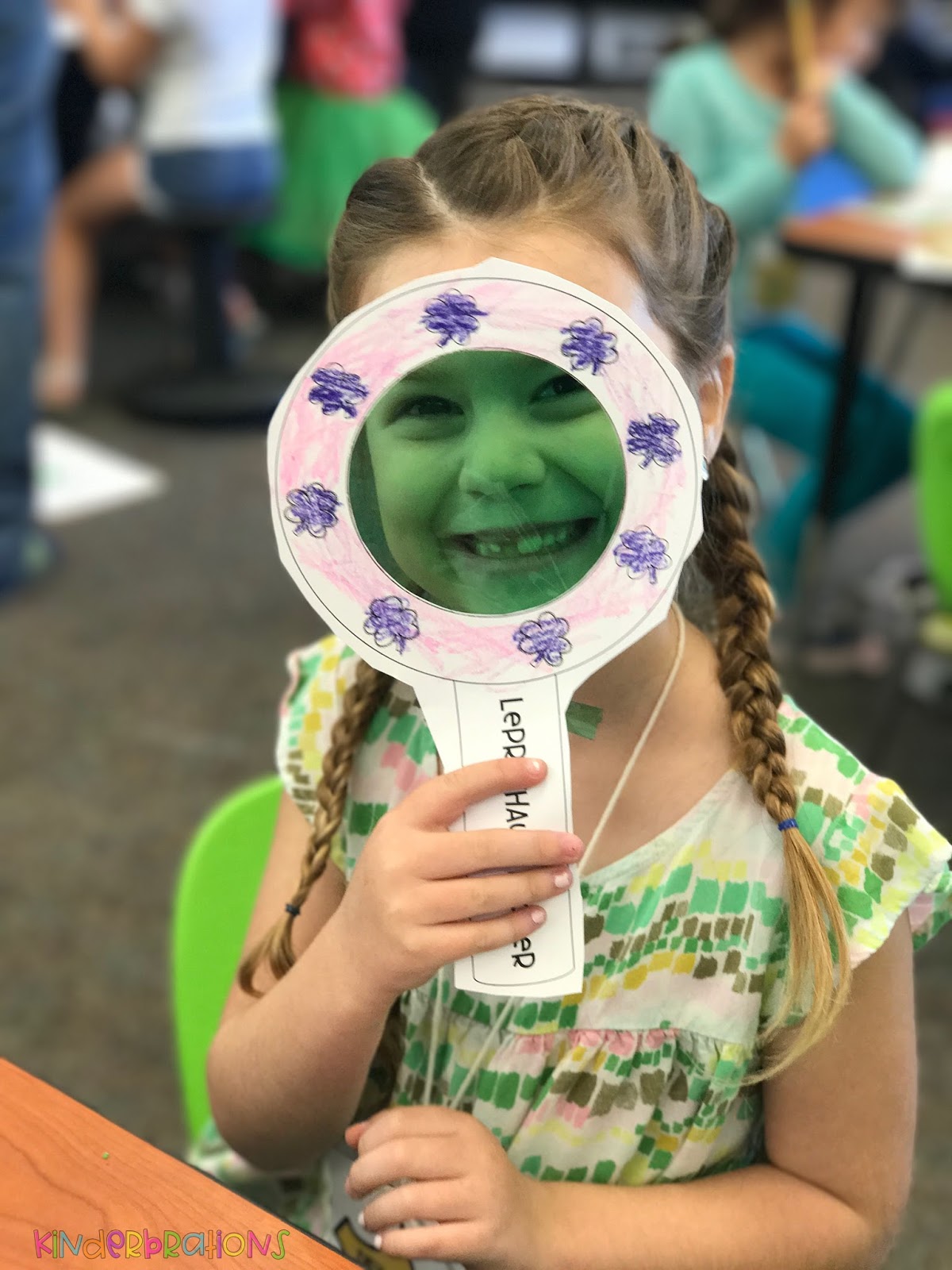 BUILDING A LEPRECHAUN HOUSE
A leprechaun loves to hide in small places and cannot resist candy and graham crackers especially green or rainbow candy. To complete this investigation, students had to build a graham cracker leprechaun house.  They also had to complete the How to Build a Leprechaun Recipe Sheet before and after building the house.  We made royal icing and put it in snack bags with a hole cut in the corner.  You could also use canned frosting too.  And yes, we did let them eat the houses! 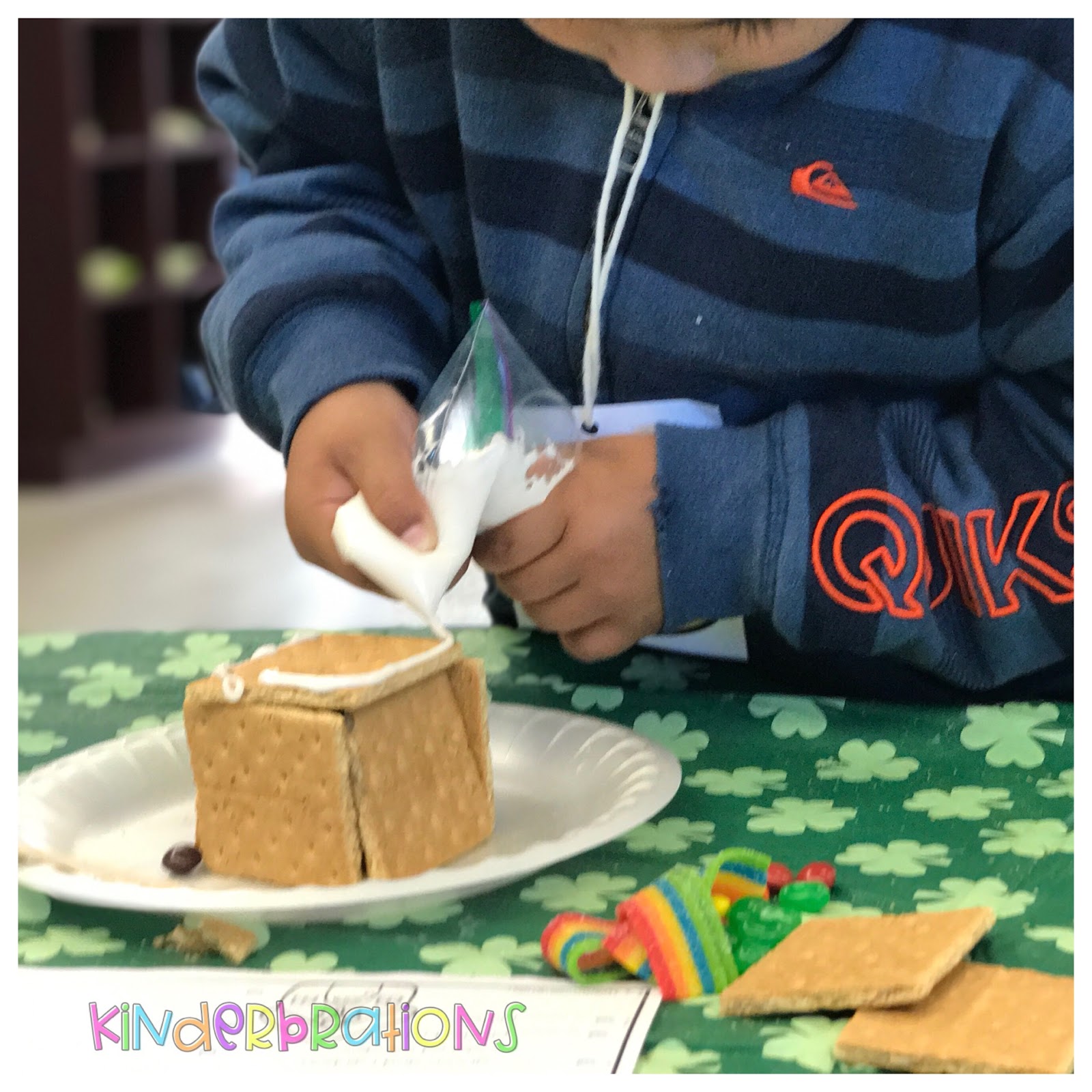 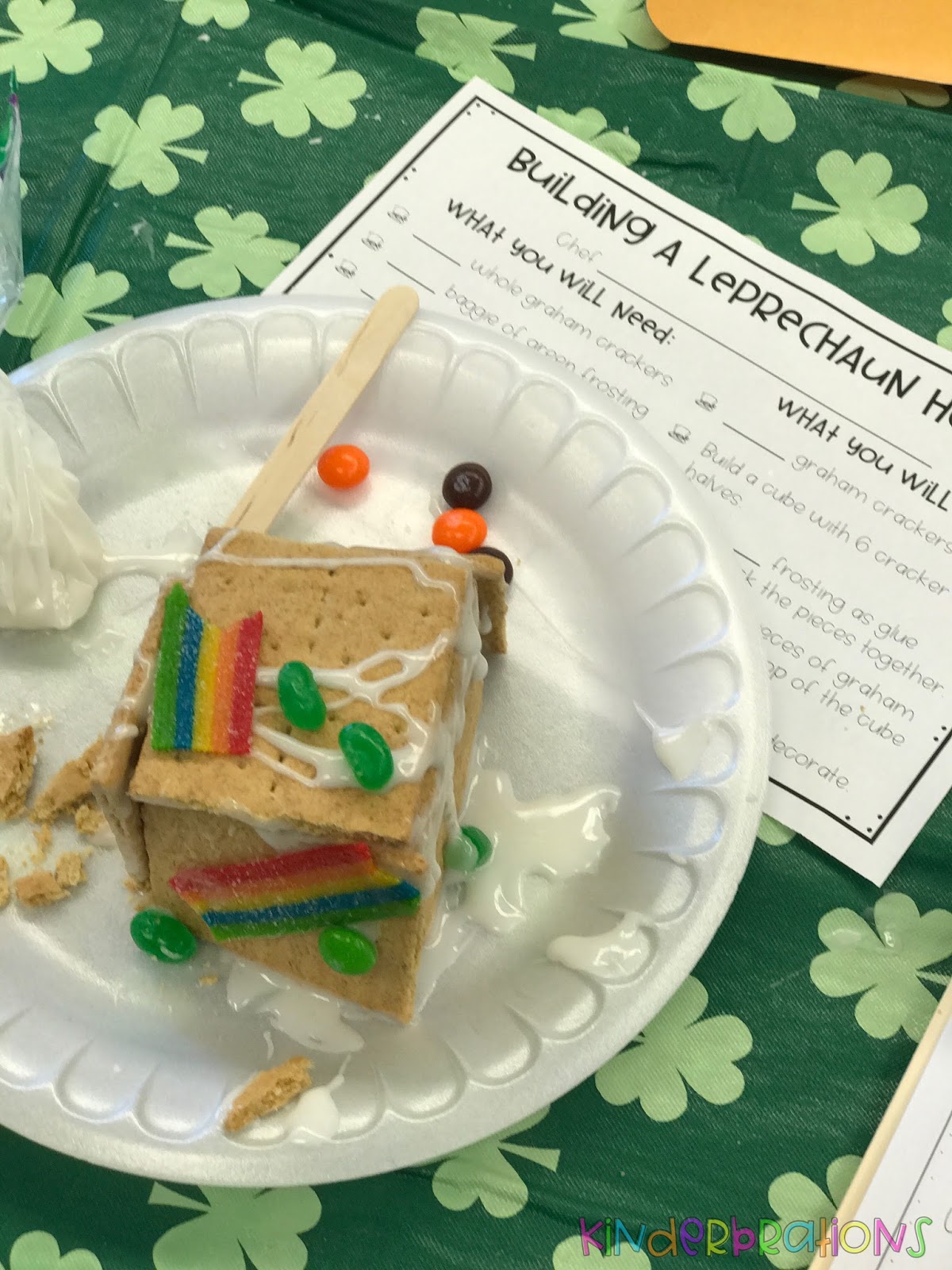 UNLOCKING CLUES
We used this as a “Write the Room” or “Scoot” type of activity.  We cut and laminated the cards (for durability) and hung them around the room.  Since the students are detectives, you could even give them a magnifying glass to carry around the room as they hunt for the cards.  They had to write down the beginning sound of each picture to figure out the word.  Once they unlocked all of the clues, they wrote the word that answers the riddle. 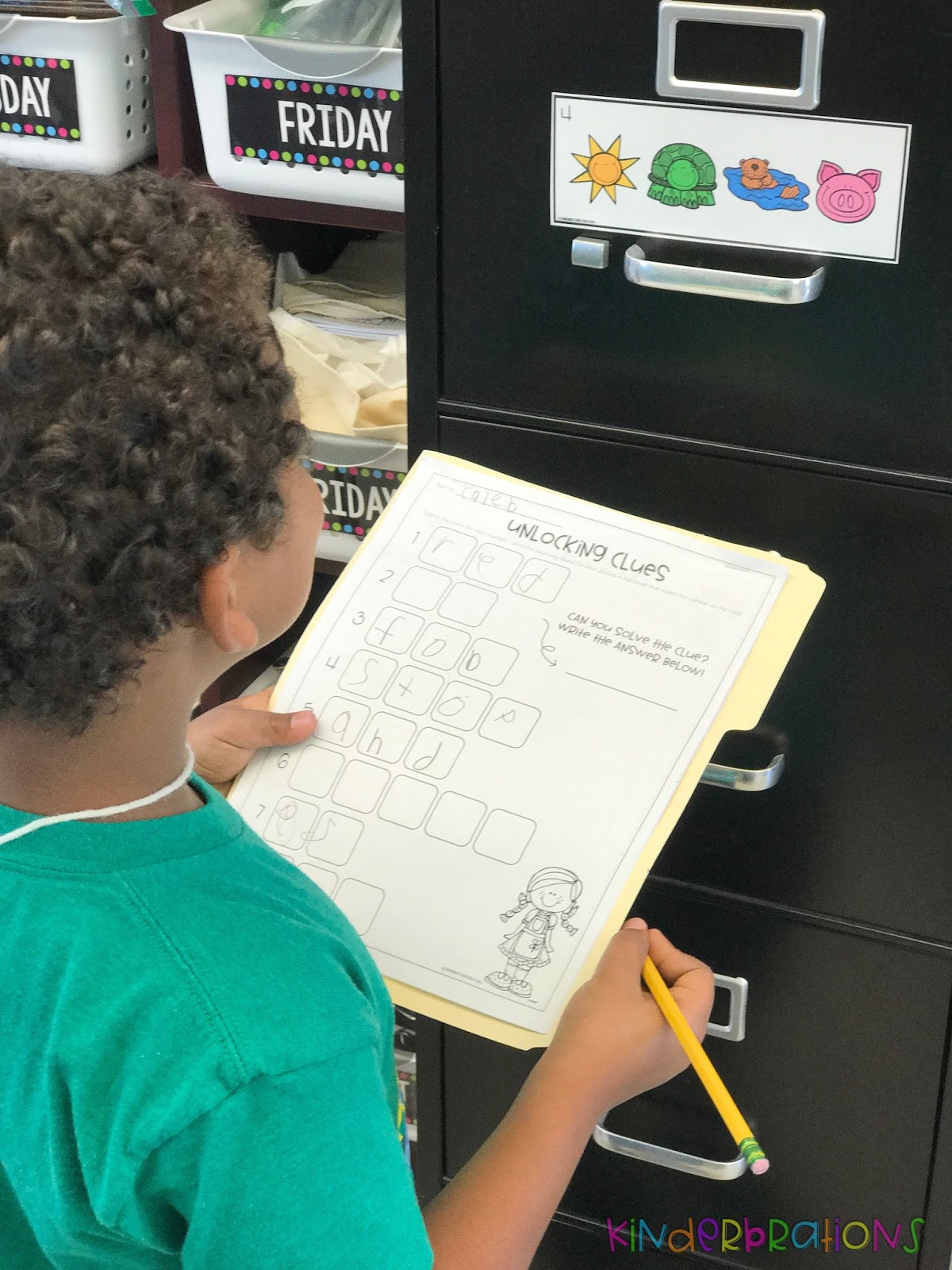 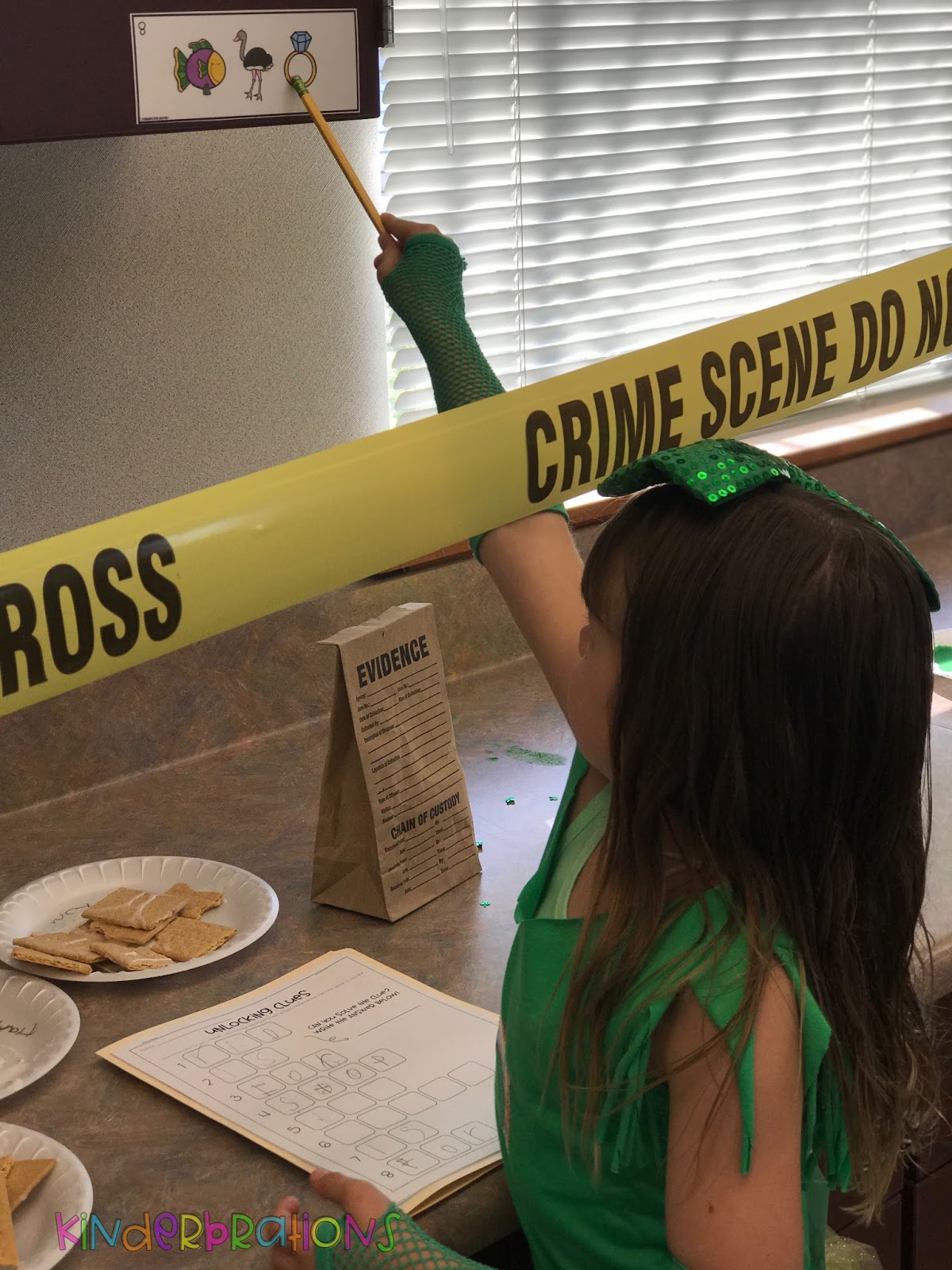 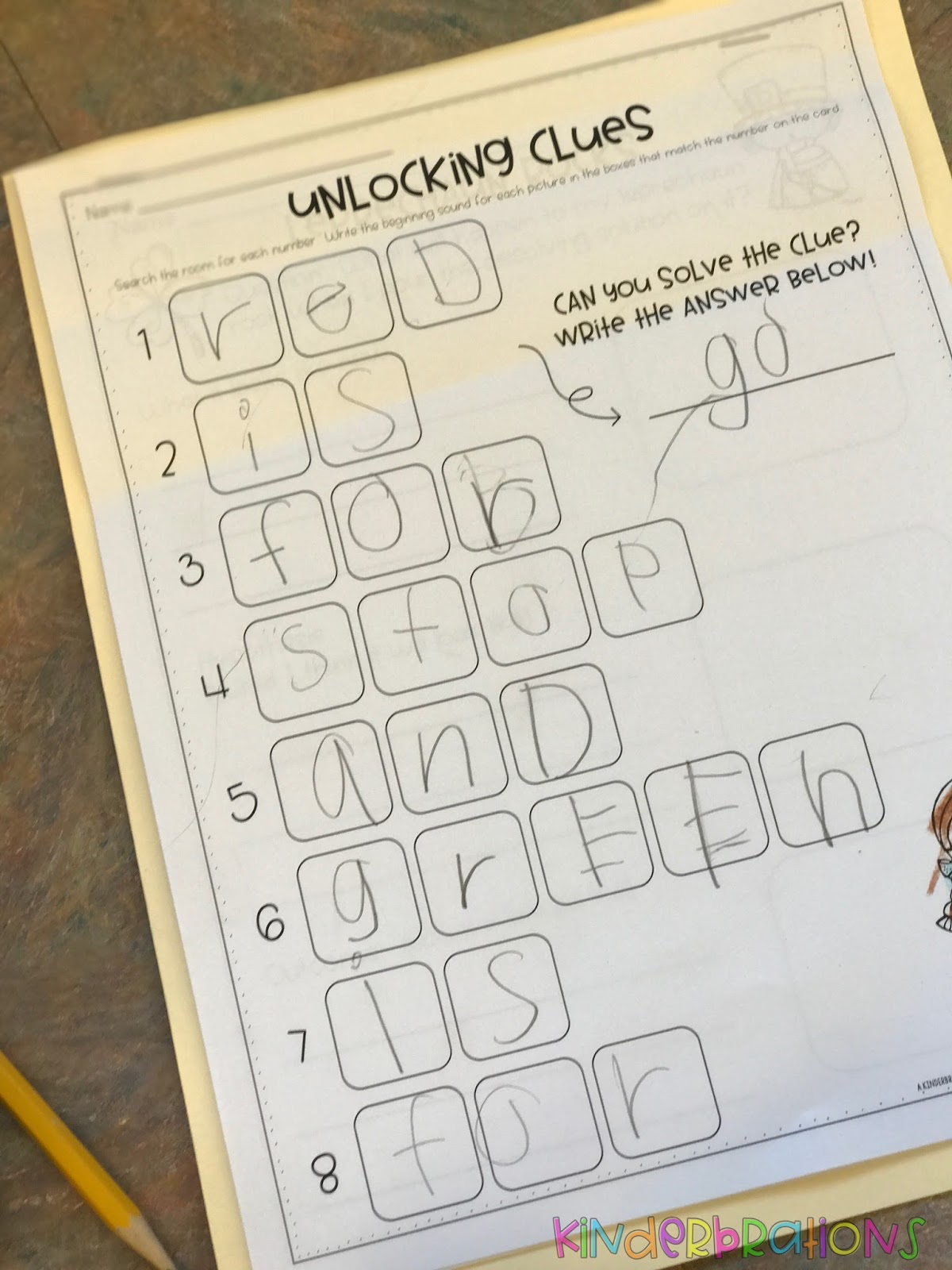 COUNTING GOLD
Students counted the coins in the gold pots and added them together.  Then, they used a clothespin to clip the correct answer.  They recorded their addition sentence on the recording sheet.  You could also have them draw coins in the empty pots or write the number. 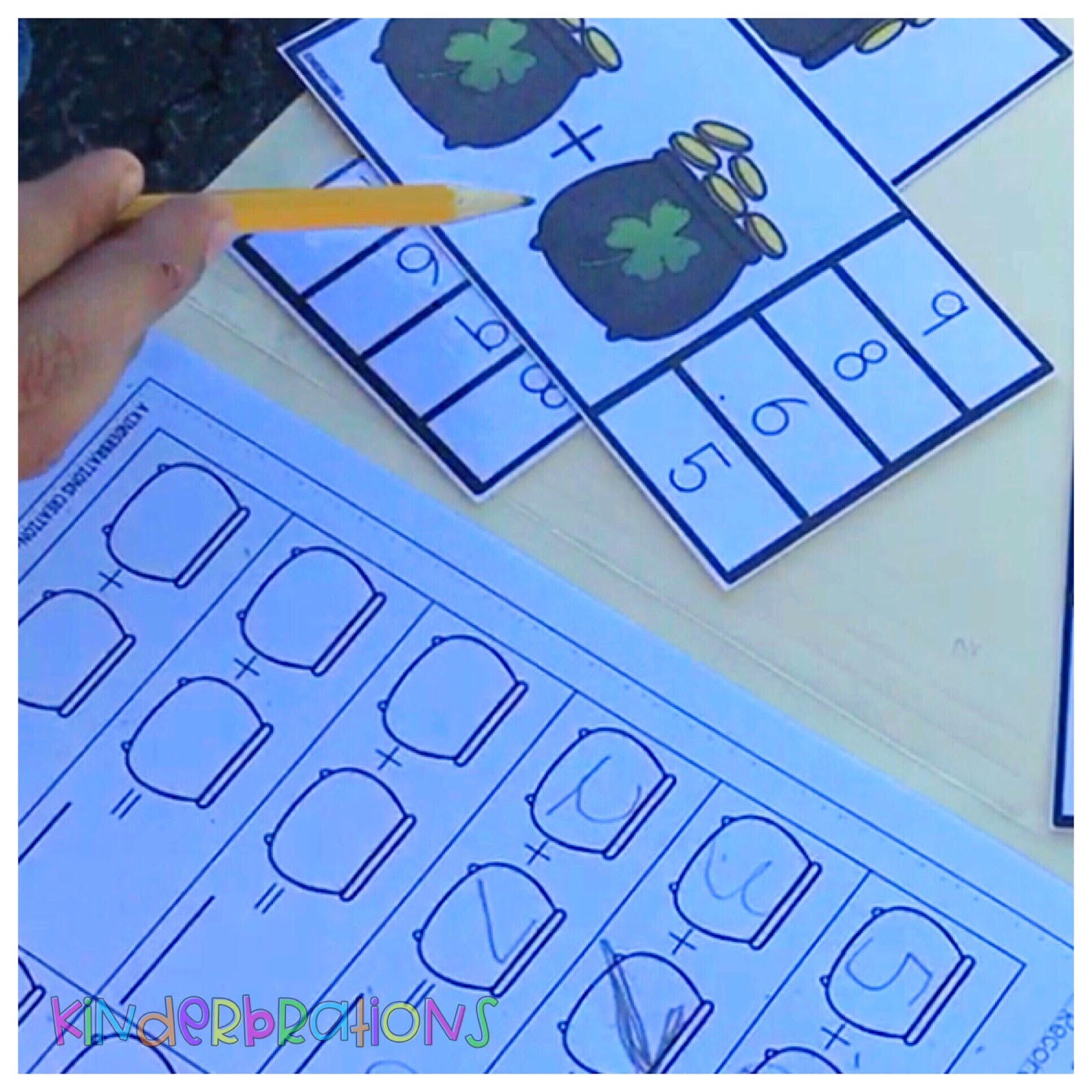 LEPRECHAUN LOOT
Students used the plastic “gold” coins as manipulatives to help them solve the number bond puzzles.  We gave each student two recording sheets (both single sided so they could be written on easily in the case file folder).  We used mini plastic cauldrons to keep the gold in.  We had ours left over from Halloween, but you can also get them from Amazon (and yes, we wish we owned stock in Amazon!). 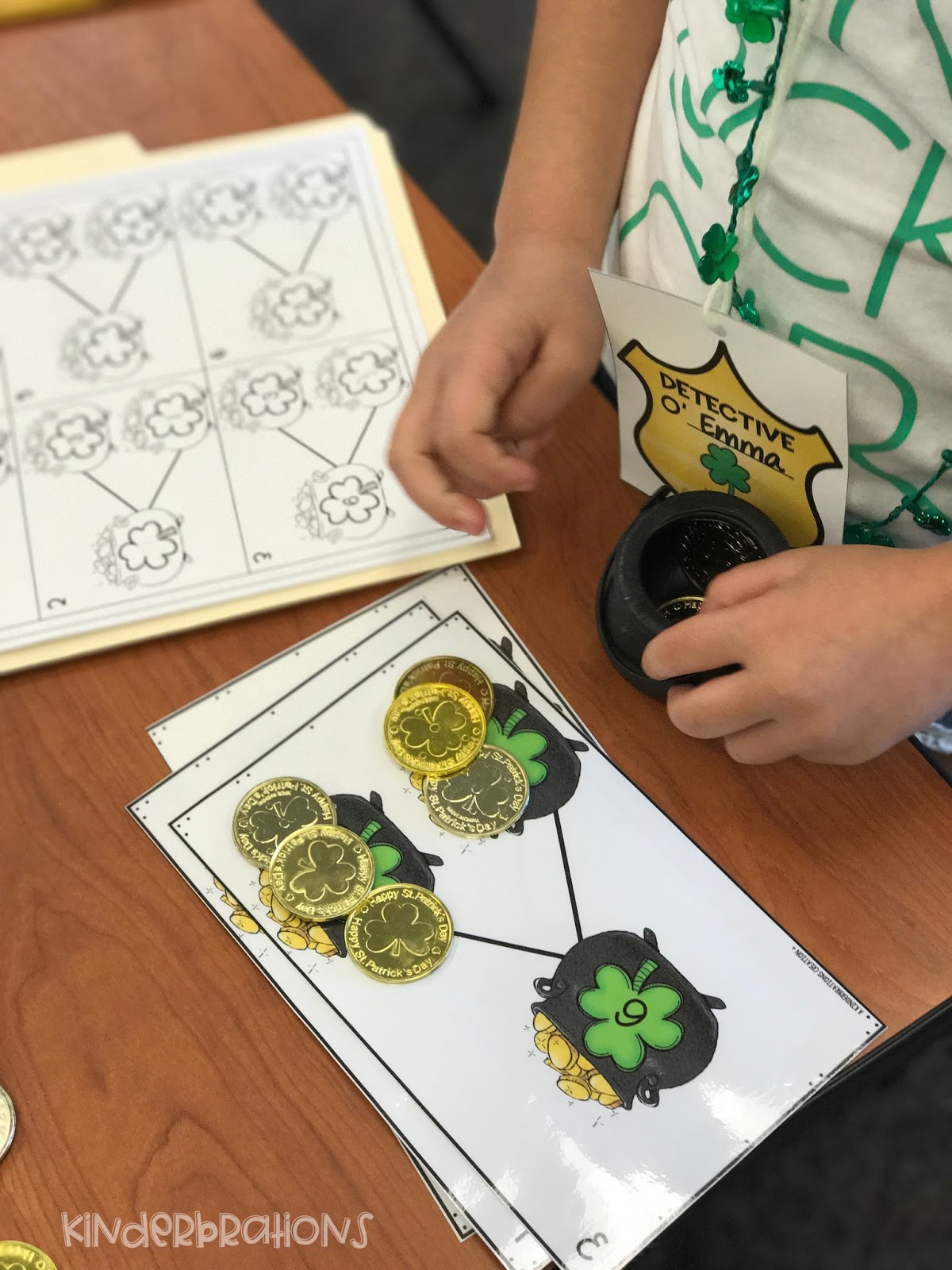 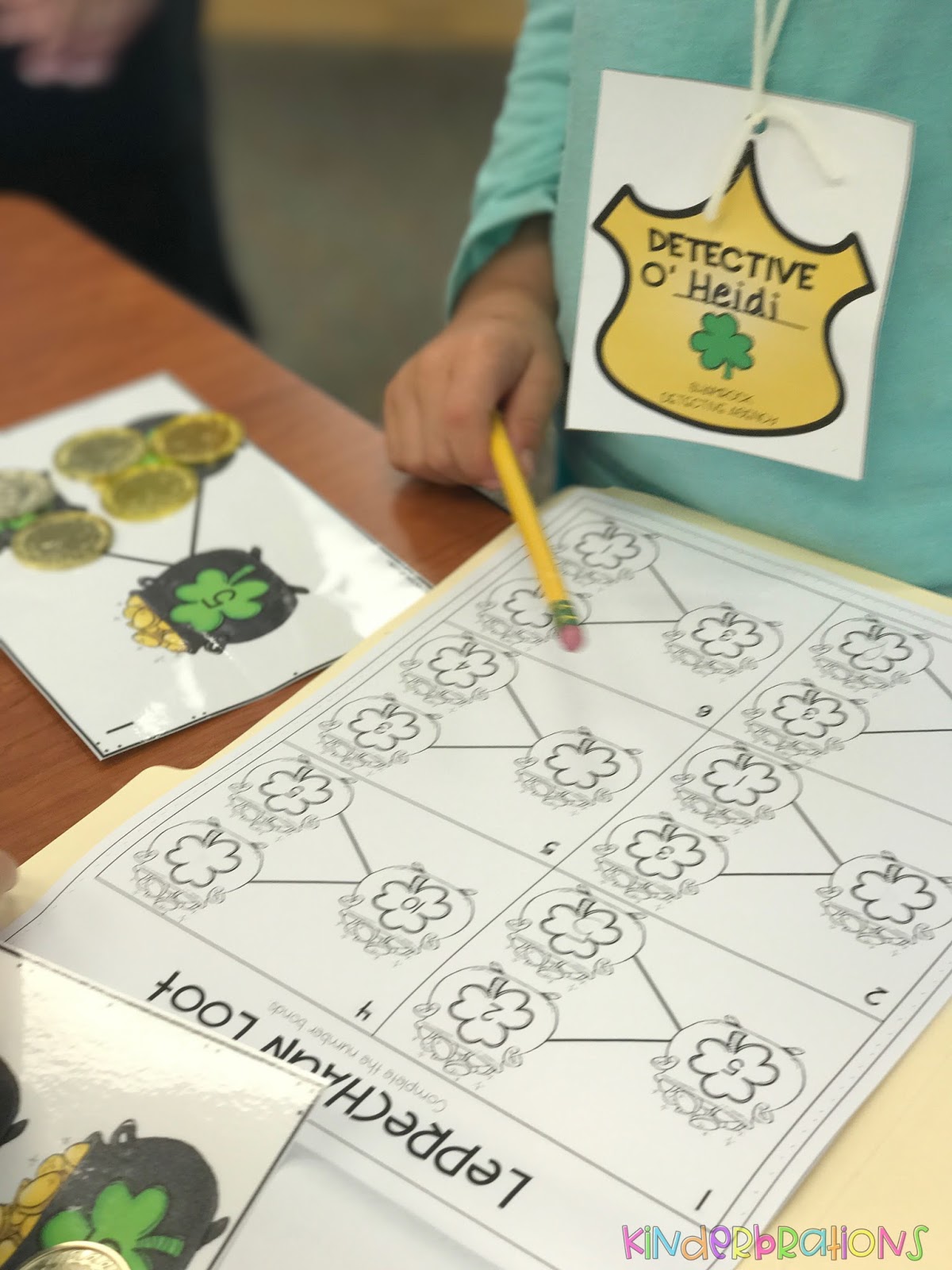 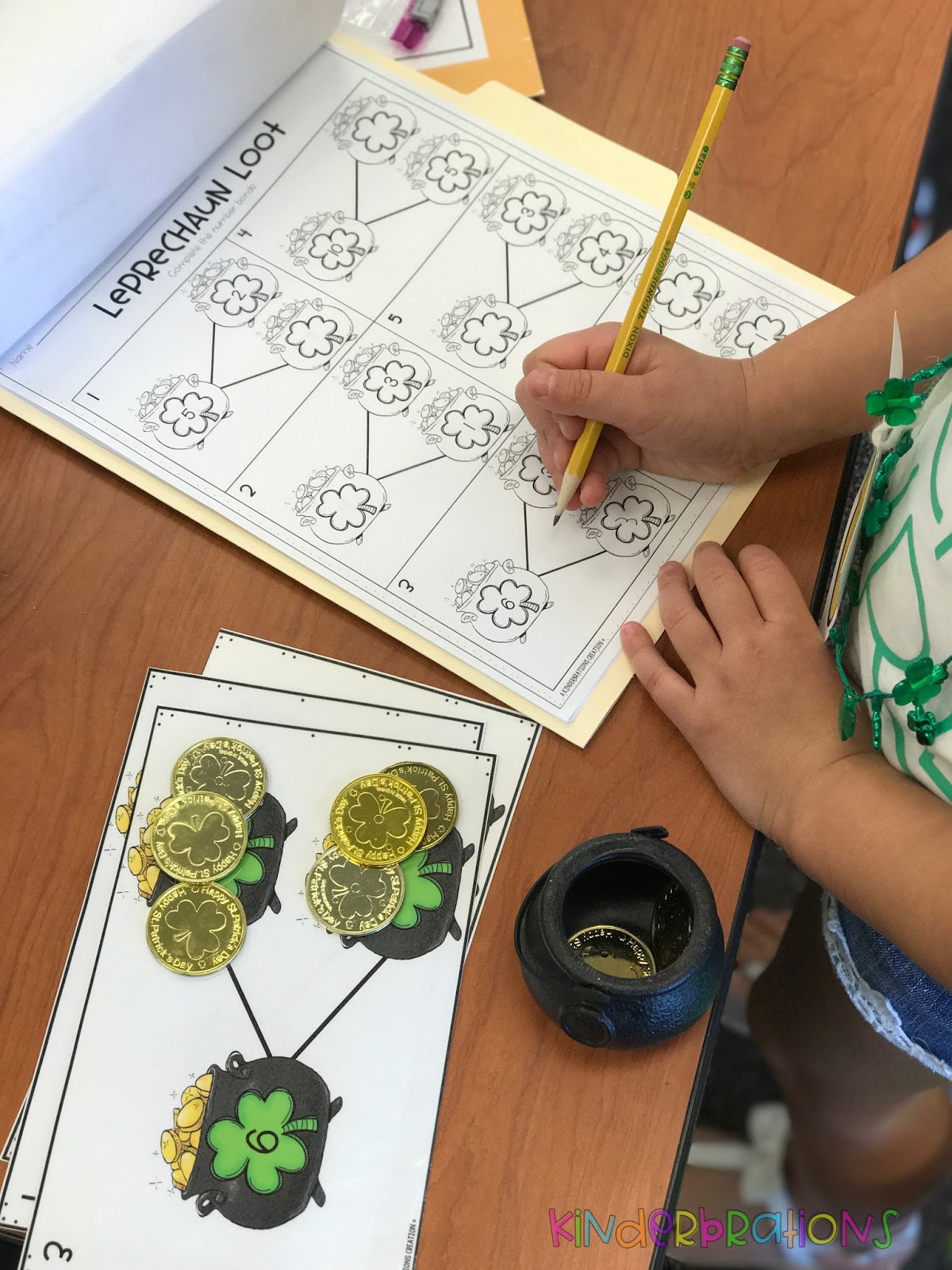 ENGINEERING A LEPRECHAUN TRAP
A week or so before St. Patrick’s Day, we sent out a note and asked parents to send in empty and clean cereal boxes, oatmeal containers, yogurt containers, cracker boxes, and anything sparkly or gold.  We showed students the materials they had to work with.  We also reviewed the engineering design process with them.  They planned a design (recording sheet was stapled in their case file), built it, tried it out, and made any modifications necessary.  When the students were at lunch, we set the traps off so when they came back they could check it out to see if they caught that tricky leprechaun. Can you believe it, not one single kid caught one! 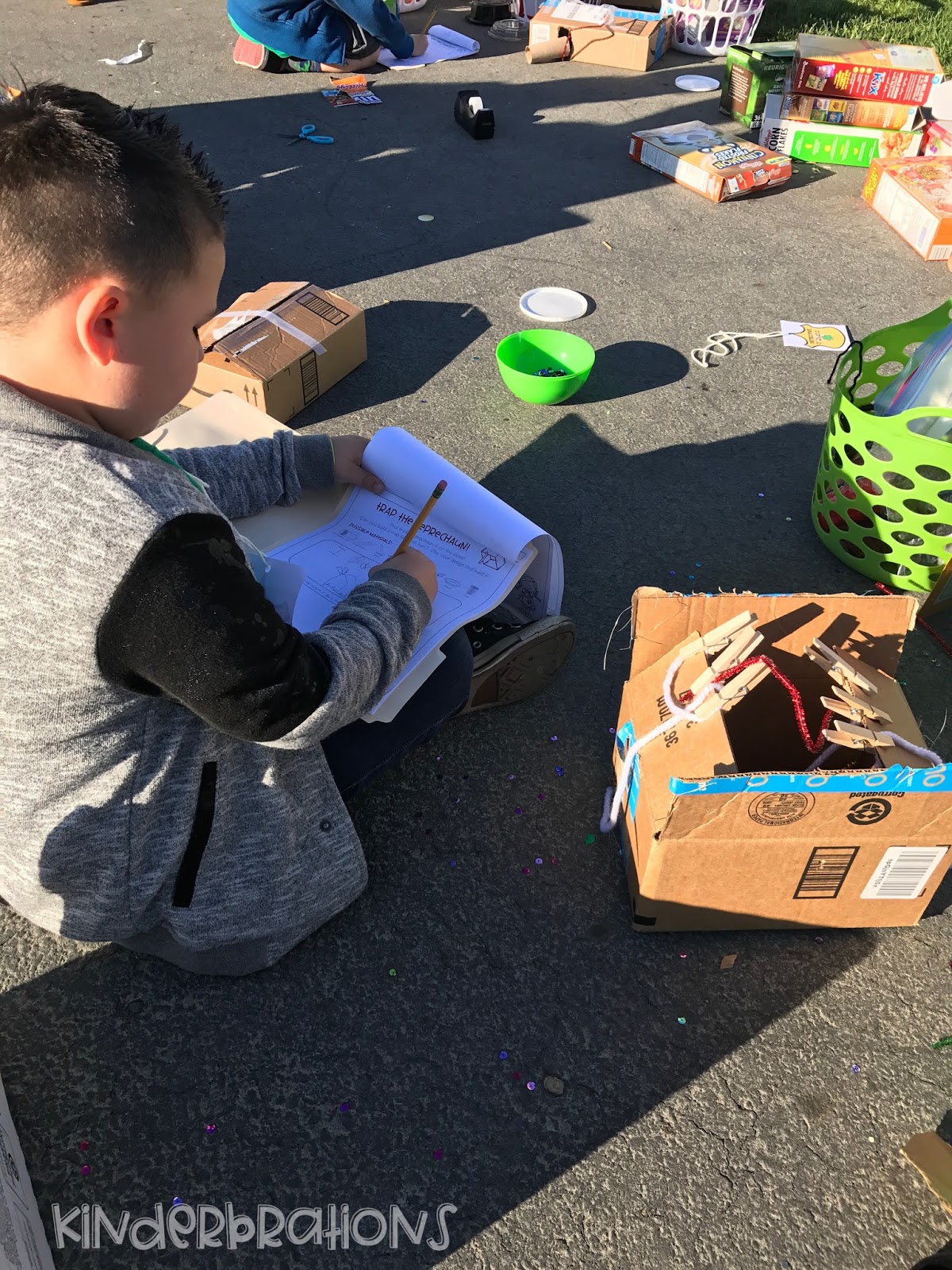 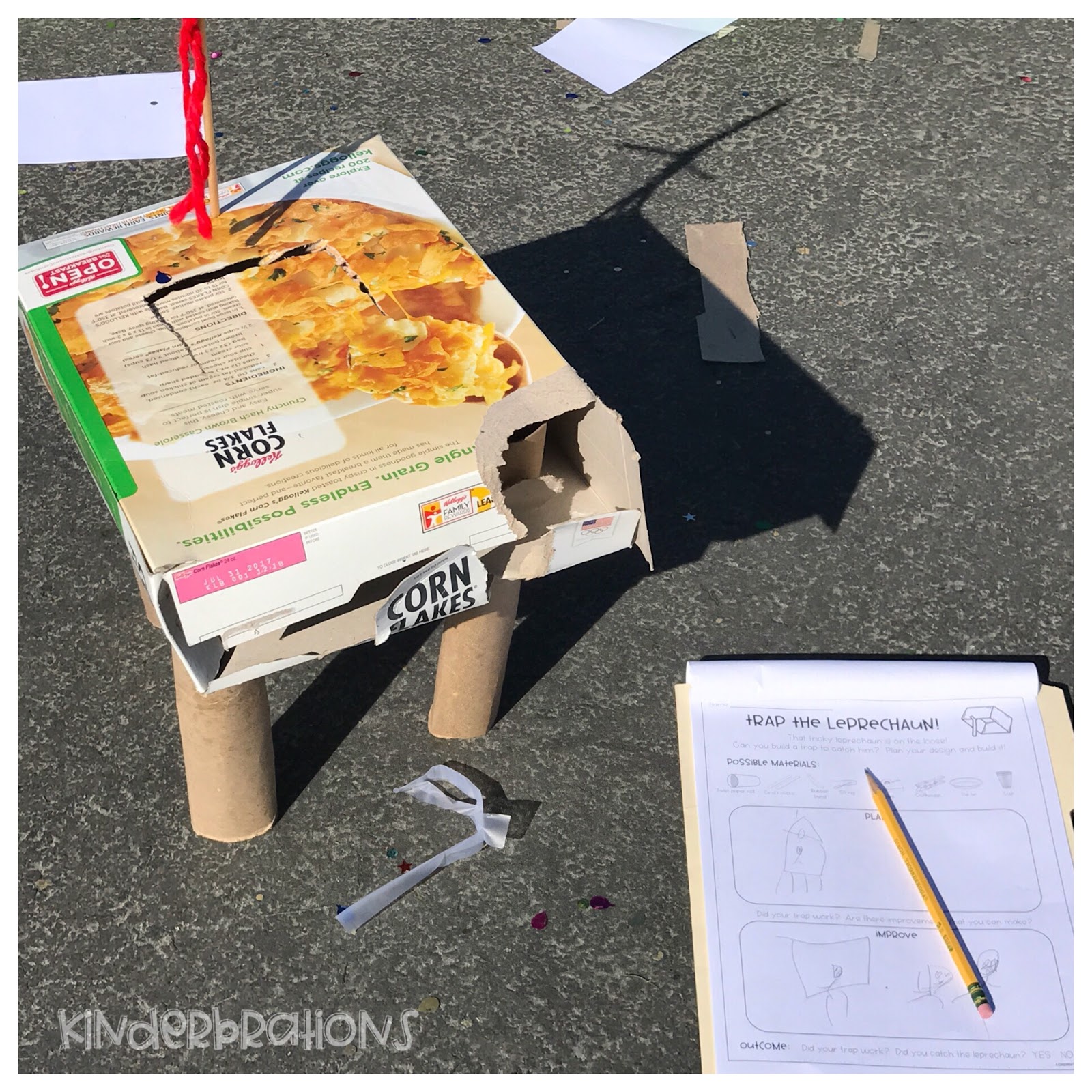 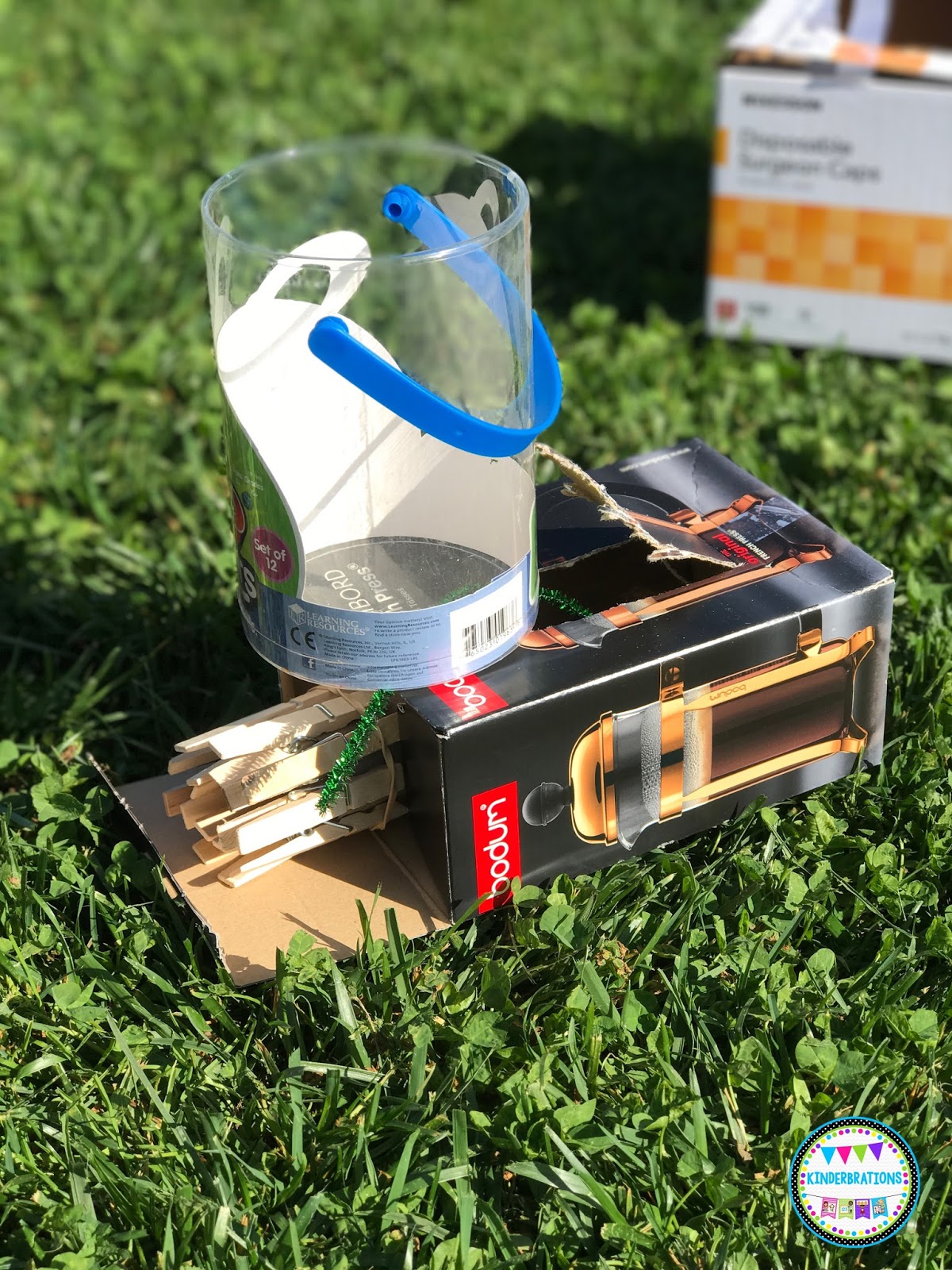 LEPRECHAUN STORIES
We made four differentiated readers for our students.  The pictures are the same in every story, and the text is similar.  The differentiation is based on the decodable words and sight words.  The students read the color version and then colored their own copy to read and take home.  They loved this center! 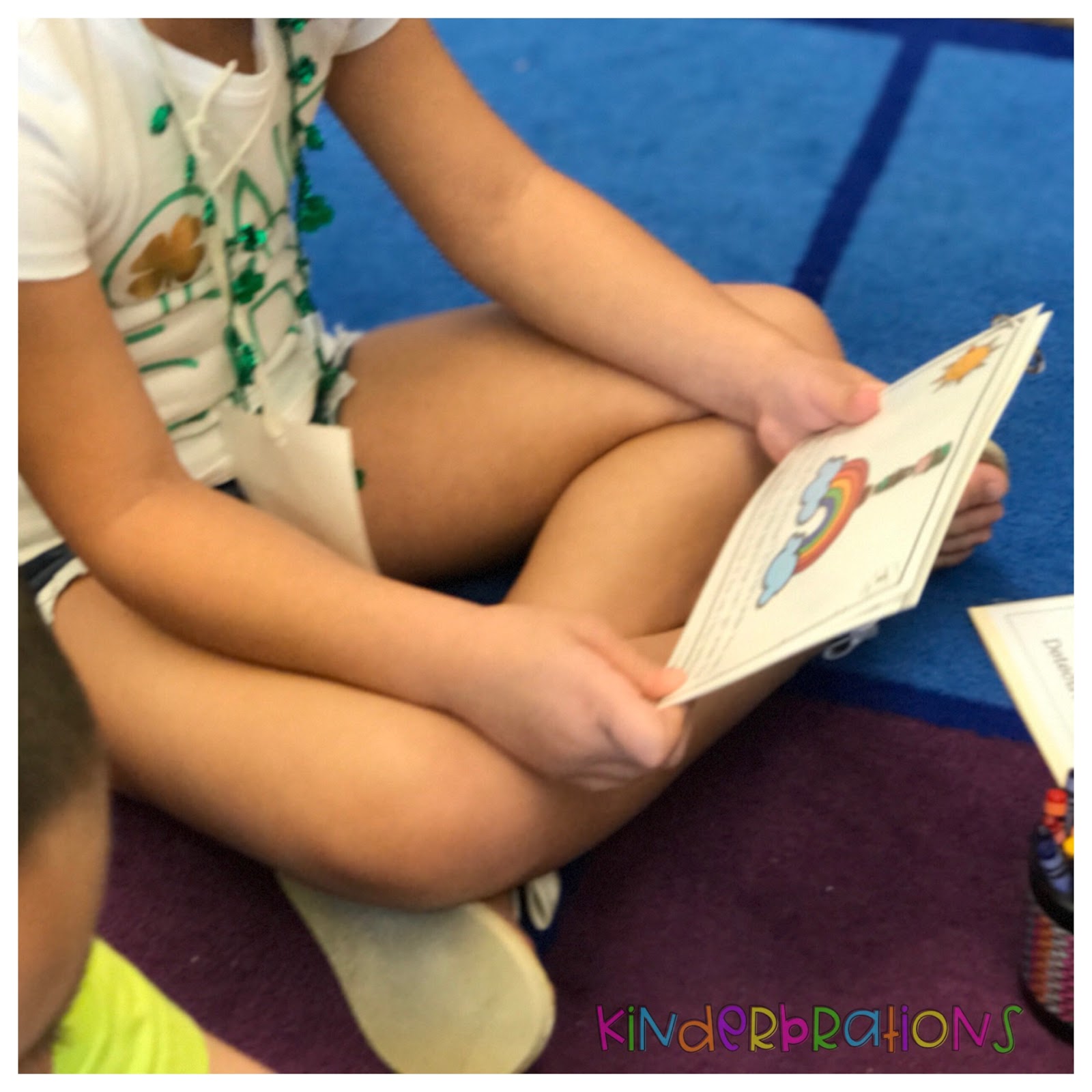 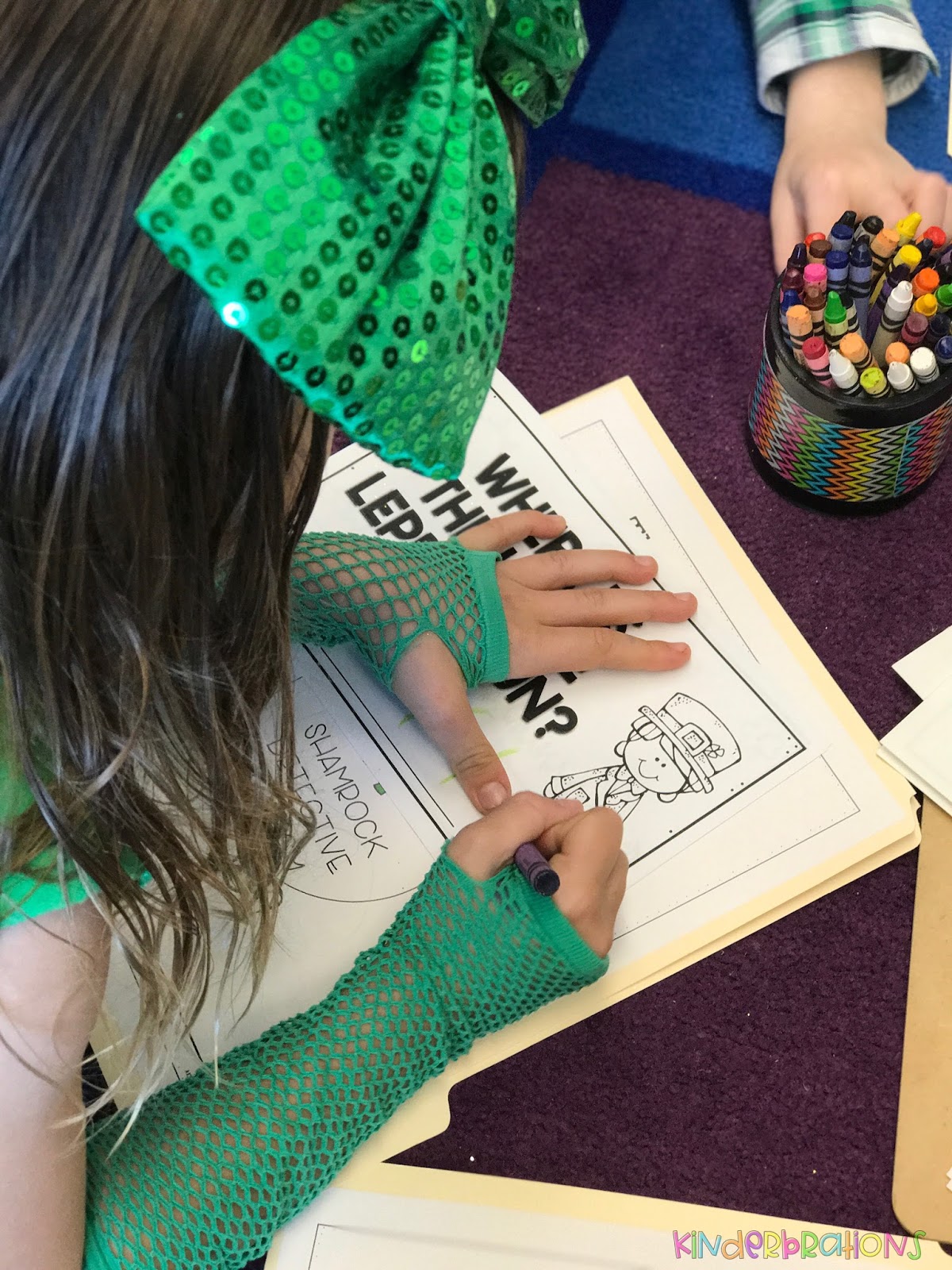 This was so magical! We prepared the Leprechaun Rocks the day before. Go to http://www.giftofcuriosity.com/magic-leprechaun-rocks-st-patricks-activity/ for the exact recipe! Students investigated the rock and drew a picture of it in the first box on their recording sheet. Then they used the special solution (vinegar) that Finnegan left for them. They had to predict what would happen to their rock when they used the solution. Finally, they poured a little of the solution on the rock and recorded what happened. It was magical and the students were SO excited to find a gold coin hidden inside of their rock! 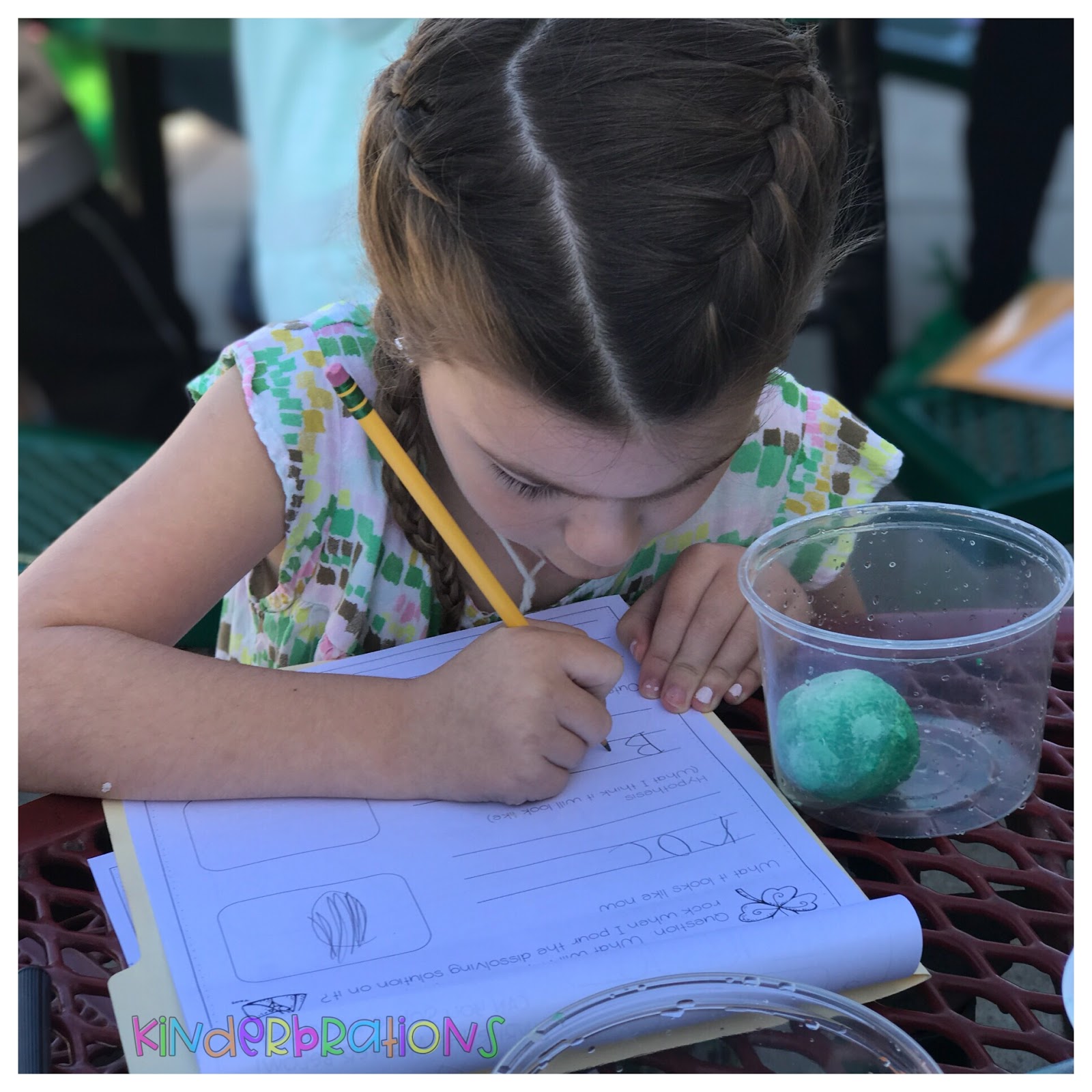 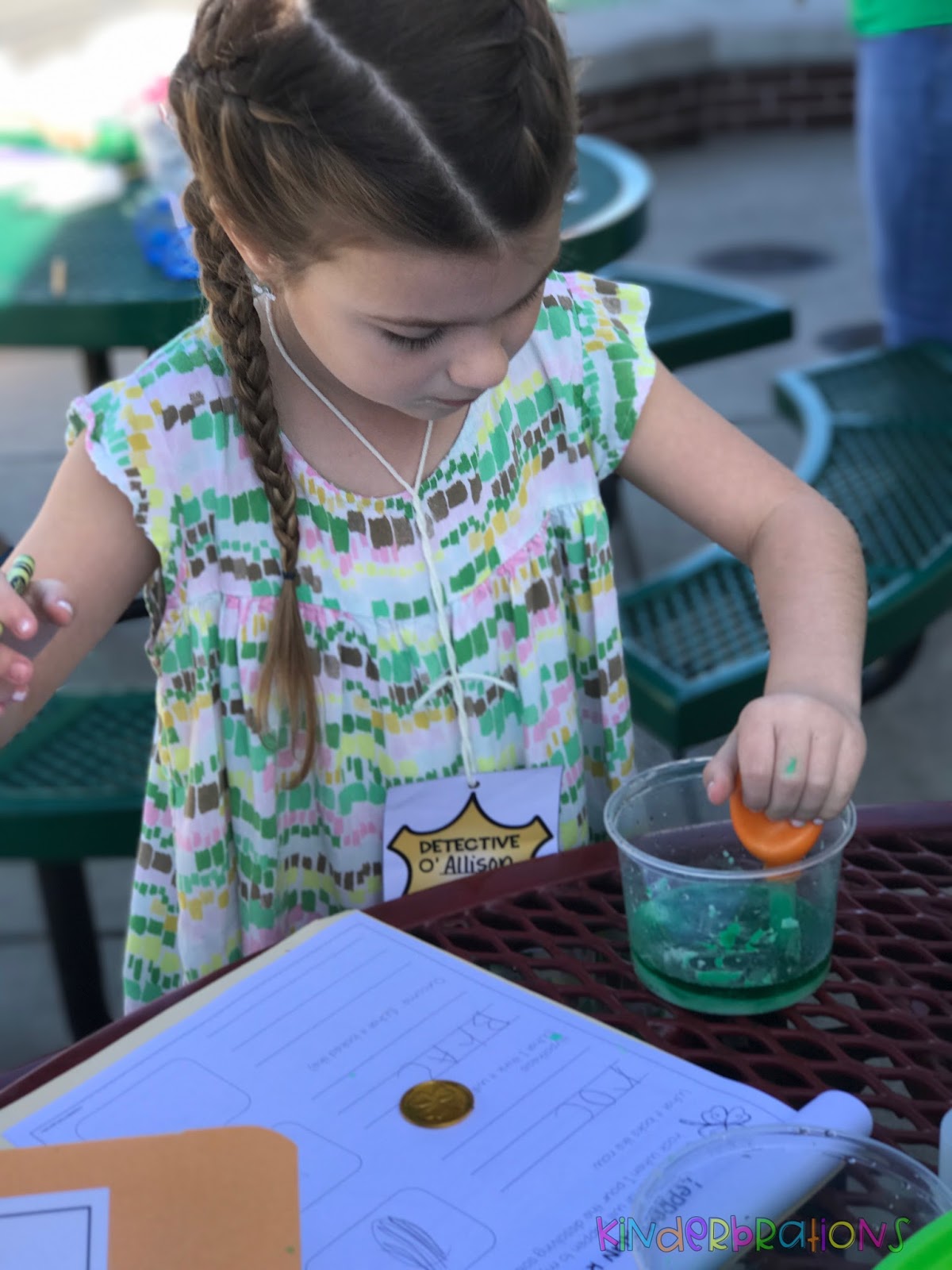 When the centers were over, we collected all of the clues and put the words in order to figure out where Finnegan was hiding.  Our parent volunteers helped by holding the clues up for everyone to see.  The day was simply magical!
We had a blast as detectives!  We can’t wait until our next mystery!
Click HERE to snag it in our TPT store! 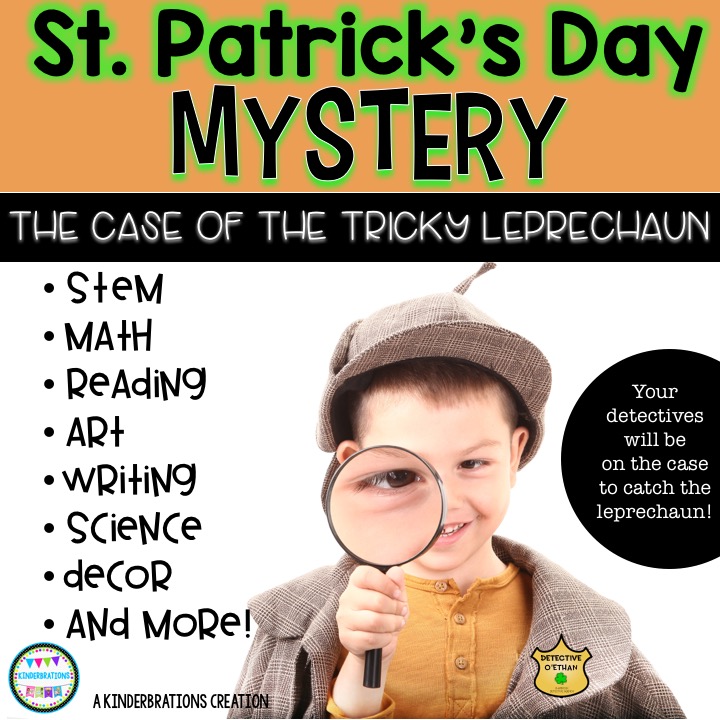 Happy St. Patrick’s Day!  May the luck of the Irish be with you!

After many requests, we have our first STEAM Day p

🐟 FREEBIE ALERT! 🐟 Are you looking for a fun

Have you heard? TPT is having a BONUS sale! Toda

Have you grabbed these FREE kindergarten screening

🎉 Woohoo! It's time for TPT's Back to School S

After many requests, we have our first STEAM Day posted in our shop! 🎉 We do a STEAM Day (5 center rotations) every Wednesday (we call them "Wonder Wednesdays") and our students LOVE them! They are also perfect for a "Fun Friday" or any day of the week!Click the link to check it out in our store: www.teacherspayteachers.com/Product/STEAM-Day-Chicka-Chicka-Boom-Boom-7223809🍏🍎 Next up...Apple STEAM Day! ... See MoreSee Less

🐟 FREEBIE ALERT! 🐟 Are you looking for a fun and engaging way to practice spelling and writing CVC words? If so, it's time to go fishing! Our students LOVE this center activity and BEG to play it! Click on the link to download this FREE CVC Word fishing activity: ed.gr/dfsfq ... See MoreSee Less

We've had questions in our Facebook group about our school's house system (based on The Ron Clark Academy's House System). Check out this article (which features our school- so cool!) all about how we incorporated this into our elementary school! www.kqed.org/mindshift/50960/how-being-part-of-a-house-within-a-school-helps-students-gain-a-sens... ... See MoreSee Less

Some larger schools are creating smaller "houses" across grade levels and classes to help kids feel a greater sense of belonging and school engagement.
View on Facebook
· Share

Have you grabbed this FREE kindergarten screening assessment yet? We use it to assess kindergarten readiness skills!Click here 👉🏼 kinderbrations.ck.page/420f3b0571 ... See MoreSee Less
View on Facebook
· Share